Other Duties as Assigned: Coaching the E-Team

Esports are like others sports and also not, which is their appeal for this business officer.

Photo above: A student plays a virtual reality (VR) game in the Parker School media lab. Photo courtesy of the school.

Four years ago, I volunteered to teach a digital media class through the Parker School’s interim program — two days during which students explore interests and passions outside the classroom. Students might choose to intern with local businesses or organizations, get their diving certification, take an intensive pottery course or backpack through nearby Kohala mountain. In the digital media interim, students learn about marketing, graphic design, videography and virtual reality (VR) applications through a combination of exercises, discussions and real-world experimentation.

You might wonder how a business officer came to teach a digital media class. I am very comfortable around technology, and I always strive to learn how I can best use it in the business office and for personal efficiency. At my previous school, one of the many hats I wore was that of technology coordinator. And I consider myself a life-long gamer, back from the Oregon Trail days to the original Nintendo console.

Video games have always offered me the chance to connect with my friends and really be myself. My son, who is currently in seventh grade, is likewise a “tech wiz” and gamer, and our conversations give me a glimpse into what our current students are interested in doing in digital media and — maybe more importantly — what they’re not.

A Team Is Born

The second year I ran this program, the students were interested in VR gaming, and out of those discussions, the idea for an esports team was born. Esports, or competitive online gaming, is one of the fastest-growing sports in the world. It offers students the opportunity to play individual and team-based games. Popular games include League of Legends, Rocket League and Super Smash Brothers Ultimate. Like traditional sports, players practice and compete together, communicate with teammates and develop their critical thinking skills.

Our team meets for two hours every week and competes in online tournaments against teams based in Hawaii and nationally, through the High School Esports League (HSEL). During HSEL off-seasons, the students compete in intramural tournaments and in broader gaming events in sports games like FIFA soccer and Madden NFL football. Due to pandemic-related spacing constraints, team members currently meet in various classrooms around the school, but we hope to have a more permanent location in the future. Aside from our weekly practices, the team also practices together virtually on weekends. 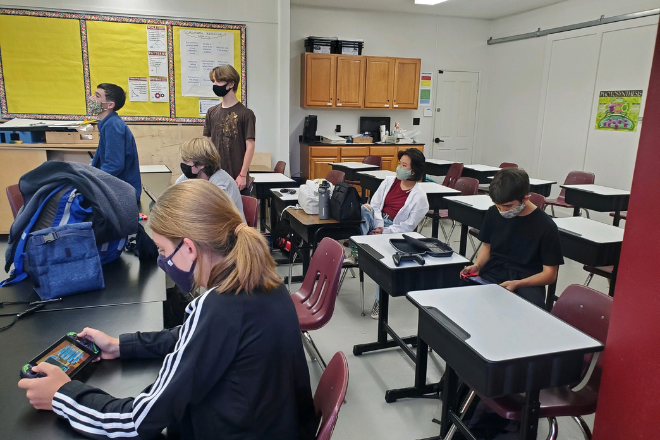 The Parker School esports team at practice. Photo courtesy of the school.

As in other sports, we have some students who on the first day expect to play games the whole time, and others who are all-in on the competition and have trouble enjoying the experience. Balancing those attitudes can be a challenge, and I see it as my main responsibility as a coach. I remind the students that it’s not just about the couple hours spent in a tournament, but rather the process of committing to your craft, honing your skill and giving it your best. And it can be challenging when strong seniors graduate, and student leaders must step up and boost morale — which they’ve done.

A challenge unique to esports is game selection. We want the students to have fun while also making sure that the games are appropriate. I develop and define rules for the team and avoid certain types of games, such as first-person shooter games.

Also like traditional sports, students can pursue esports well after high school. Our athletics director helped organize a Q&A with a major university’s esports head coach, which gave students the opportunity to learn more about professional gaming, sponsorships and entrepreneurship as well as esports at the college level.

A challenge unique to esports is game selection. We want the students to have fun while also making sure that the games are appropriate. I develop and define rules for the team and avoid certain types of games, such as first-person shooter games.

And while esports are quickly growing, it’s worth pointing out that video games are now an established part of our culture and economy. There are career opportunities in developing esports, and this past year, Parker School invited the CEO of a video game company to talk to the club about creating and building video games, from idea to storyboard to coding. Students were able to interview the CEO, who stressed the importance of considering all possibilities when thinking about a career in gaming, from the technical side of things to the creative sides of the field.

Coaching the esports team allows me to "meet students as they are," as you hear a lot in education. I get to know them on a deeper level and encourage them to be themselves. In general, the esports community is a very accepting one. Gaming is universal – the rules of the games are simple, and anyone can participate as long as you know how to use a computer or gaming device. Our school team is very accepting of fellow students as they are and as they want to be seen. In many ways, it’s a reflection of Parker School culture.

Over the past four years, my proudest moment has been watching the club share their passions with the wider school community. For example, the students recently took it upon themselves to organize a school-wide tournament, with easy-to-learn games that are accessible to a variety of experience levels. They voted on what games to play, got the plan approved by the administration, implemented feedback and brought the idea to fruition.

There’s sometimes the perception that gaming is a boy’s club, but we are working to show that’s not true. Girls make up 20% of our team and are supported by their peers. In the next few years, my hope is that we can expand the esports team and bring more female players into the fold.

I also hope to extend the esports program to our middle school so that we can start developing talent earlier and get more students excited about the wide world of gaming. It can be more challenging to pitch the idea to parents of middle-school-aged children, who largely feel like their kids already spend enough time in front of screens. However, I am optimistic that we can get parents on board if they can see the benefits of esports. It is a great way to engage kids who are not into traditional sports to be part of a team and community, allowing them to grow and learn while doing something they already love.

After School: The Water Is Wide