Mid–2020, business officers predicted a bumpier outcome for FY21 than came to pass. Deficits and cash draws were smaller, while aid awards were higher.

Early in the COVID-19 pandemic, NBOA periodically surveyed our member schools to gather and disseminate the most up-to-date information on independent schools’ operational and financial responses to the crisis. In fall 2020, we asked members to predict how their schools would fare financially in the 2021 fiscal year. FY21 is now behind us, and it’s time to see if these projections held true. I analyzed data from Business Intelligence for Independent Schools (BIIS) in three areas: surplus and deficit, cash and financial aid awards.

The results: 71% of schools experienced a surplus in FY21, and 29% saw a deficit, as measured by the difference in total operating income and total operating expenses. This is a much better outcome than predicted in October 2020, when unanticipated operational expenses resulting from the COVID-19 pandemic made budgetary management increasingly difficult at the time.

Day schools, schools with 300-499 students enrolled, and schools in the East (New Jersey, New York), Southeast, Southwest and West regions fared particularly well, with at least 72% of schools ending the 2021 fiscal year with a surplus.

While schools may have been expending funds on pandemic-specific needs, other types of expenses — such as athletic or auxiliary costs — were lower than usual, resulting in a moderate 2.4% increase in median total operating expenses per student (from $27,366 in 2019-20 to $28,031 in 2020-21). Some schools had their incomes supported by Paycheck Protection Program (PPP) loan forgiveness and/or strong investment returns. 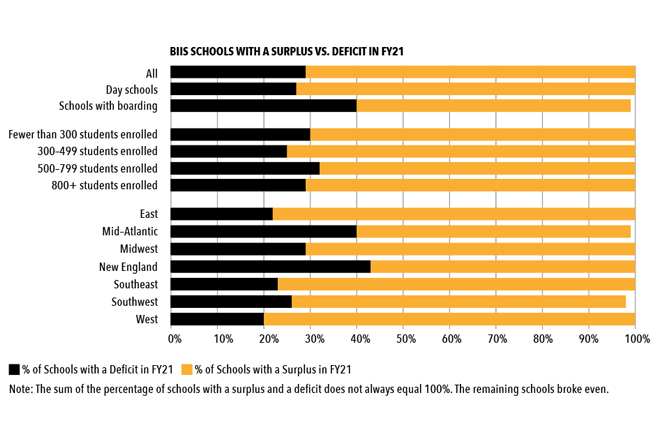 The prediction: 34% of schools anticipated an increase in their draw from cash reserves over FY20, not including draws from endowment or other investments.

The results: 17% of schools increased the amount of funds drawn from their accumulated surplus/reserves from FY20 to FY21, less than predicted. Many of the schools that increased their draw from reserves did not draw any of these funds in FY20.

It’s no surprise that independent schools worked to meet the financial needs of their families. Knowing that financial aid is an important part of many schools’ business models and missions, tuition discounts still impact revenues. It will be important to monitor financial aid in the coming years to determine if this increase was a temporary change or part of an ongoing trend.

You can find more analysis of BIIS financial and operational indicators covering the pandemic years 2019–2021 in NBOA’s Financial State of the Industry report.

of 5 school-aged children live with a mental health condition.